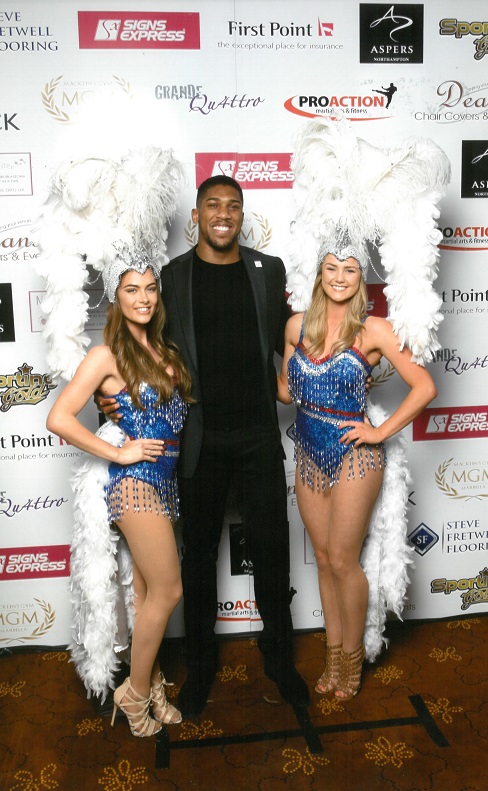 Olympian and new IBF World Heavyweight Boxing Champion Anthony Joshua, MBE was the star of a charity gala event at Aspers Casino on Saturday which raised over £20,000.

The Wellingborough-based charity supports families affected by neuroblastoma and raises money to fund vital research and education programmes into this devastating disease.

It was set up by parents Chris and Samantha Curry in memory of their five-year-old daughter Niamh, who was one of the 100 children to be diagnosed with neuroblastoma in the UK each year.

The money was raised on the night by a combination of ticket sales and donations.

“The work Niamh’s Next Step does is incredible, and when they approached us about using our function hire facilities and restaurant, we were more than happy to donate our resources for free,” said David Stratford, Aspers’ General Manager.

“Community involvement is very important for Aspers and with such a worthwhile cause benefiting from the event we were delighted to be involved,” he added.

The event held on the 300-capacity first floor function room at Aspers started with a live performance from Northamptonshire band Grande Quattro, before guests were treated to a three course meal.

The star of the evening, 27-year-old Joshua is a British gold medal winner in the super heavyweight division at the 2012 Olympics, and silver at the 2011 World Championships.

To find out more about the Niamh’s Next Step charity, go to niamhsnextstep.com, follow @niamhsnextstep at Twitter.