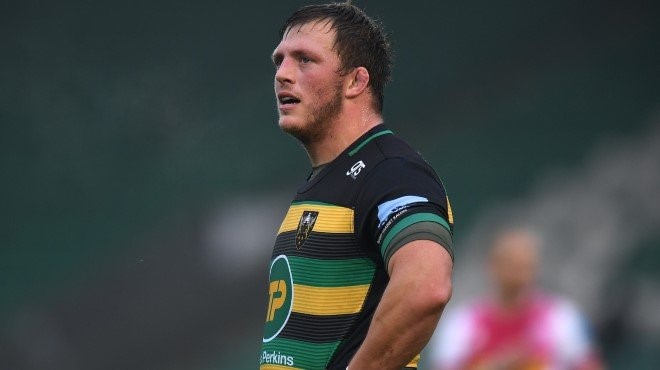 Alex Waller will become only the 24th player in the Club’s history to hit a triple century of Northampton Saints appearances when he leads the side out against Wasps this Saturday (kick-off 4.30pm).

Since records began in 1895, only 23 Saints have reached the impressive milestone, and now the 31-year-old’s name will be added to the illustrious list when the Kettering-born prop runs out at Franklin’s Gardens in front of almost 4,000 Saints supporters tomorrow.

Api Ratuniyarawa also celebrates a Northampton milestone and will follow his captain out of the tunnel as he celebrates a century of appearances in Black, Green and Gold, while Courtney Lawes will run out in Saints colours for the first time in 2021 after overcoming a pectoral injury that has kept him out of Chris Boyd’s side since Boxing Day.

Sam Matavesi and Paul Hill continue alongside Waller in the front row for the fourth week running, while Dave Ribbans mans an unchanged engine room alongside centurion Ratuniyarawa.

Lawes’ return to the side sees him line-up at flanker, while Tom Wood shifts into the No.8 jersey to round off the pack with co-captain Lewis Ludlam.

Tom James partners the returning Dan Biggar in the half-back berths and Fraser Dingwall starts for the first time since mid-April, joining Matt Proctor in the centres.

Ollie Sleightholme retains his place on the wing while Tommy Freeman moves to start Saturday’s clash at fullback, with Taqele Naiyaravoro returning to the other wing to complete the back three.

Emmanuel Iyogun and Connor Tupai are set to make their first appearances of the season from the bench, while Piers Francis returns from injury to take his place amongst Saints’ replacements.

Not available due to injury: