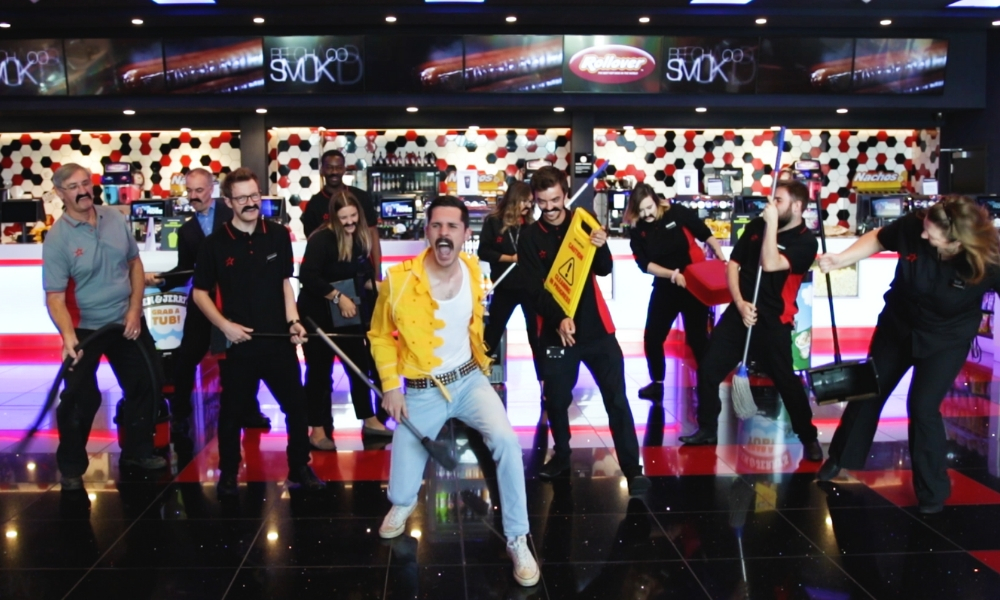 The former University of Northampton Media Production student was invited to the premiere by 20th Century Fox after a lip-sync video of Queen classic ‘We Will Rock You’ she directed, featuring her fellow Cineworld colleagues, went viral on Facebook.

Federica, 22 from Italy, was completely taken aback with the response to the video, after the Cineworld Northampton promo video for the Queen biopic picked up thousands of views and likes overnight.

Federica said: “The post went up on our Facebook page on Saturday afternoon and by the end of the night we had 20,000 views. I couldn’t stop looking at the numbers go up. I still think that half of those views came from me, because I kept refreshing the page over and over.”

A freelance video editor and camera operator, Federica also works part time at the Northampton branch of Cineworld. When the opportunity to direct a short in-house promotional film arose, she jumped at the chance to direct her colleagues.

She added: “One of our cinema managers asked us to make a video to promote Bohemian Rhapsody and our cinema, I thought I could put my skills to use and make something funny that people would like.

“We all chipped in with different ideas and in the end we chose the best one: one of our managers thought we could do normal cinema things – filling up drinks and popcorn, and so on, to the rhythm of We Will Rock You. It was really easy and fun to write, it only took me a couple of hours to finish the whole script.”

Following the success of the promo, Federica admits she was shocked when the call came offering her the chance to attend the star-studded premiere of Bohemian Rhapsody at Wembley.

Federica added: “The video was sent to the Cineworld marketing team as well as the film’s production companies. We got compliments from 20th Century Fox, and I thought that would be it. Then one day I got a call from the cinema and they said ‘We have two invites to the Bohemian Rhapsody premiere’. I’ll be honest, I don’t remember much of that call after that.

“The premiere was wonderful. We got to walk the red carpet with the other guests and Marly (Freddie in the video) got recognised by quite a few people because they had watched our video. Unfortunately we didn’t get to meet any stars in person but we did see Roger Taylor up close. He has that cool rock star vibe. Sunglasses on, serious face. He is just so cool.”

To see the Cineworld video in full – can find it here.