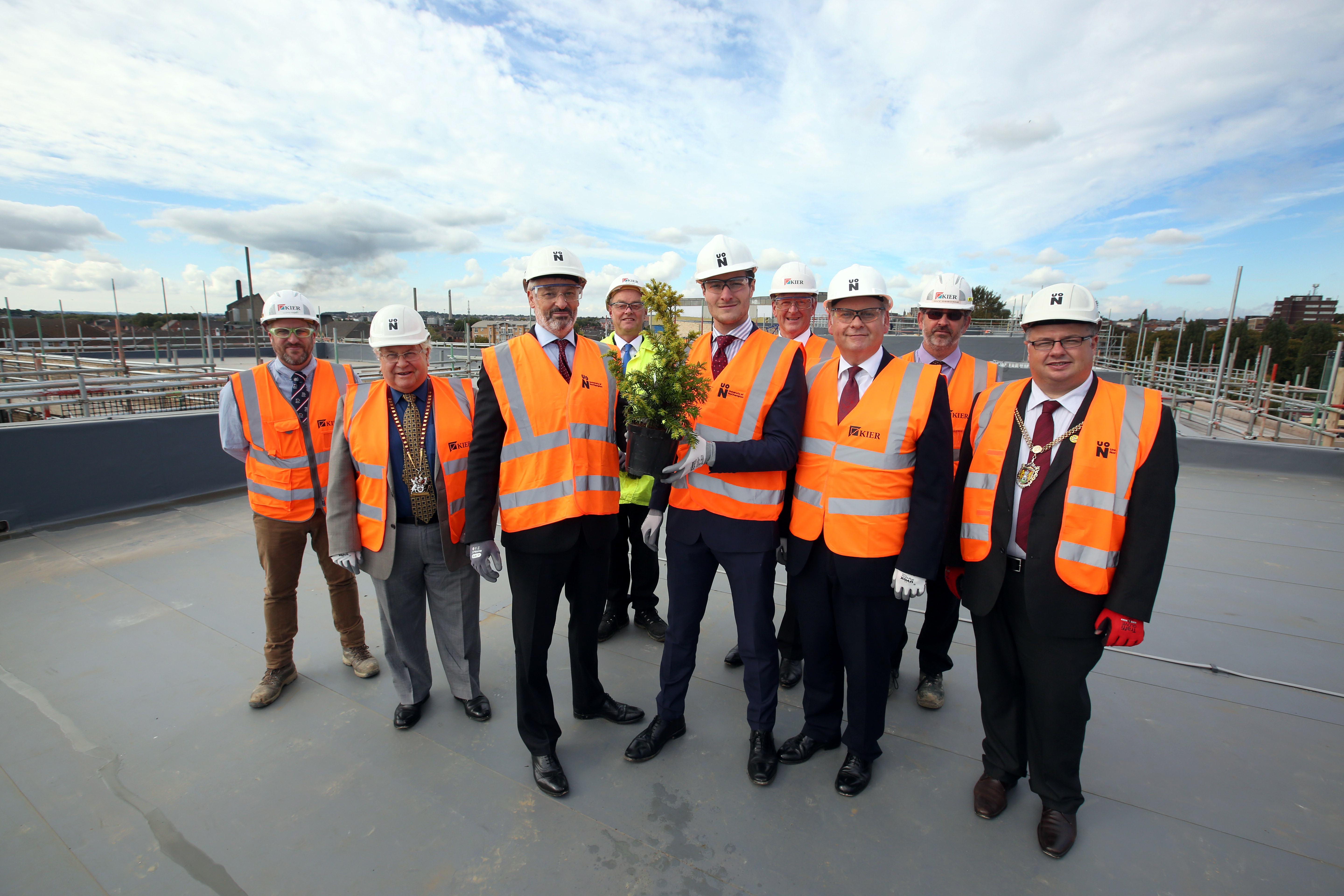 The University of Northampton has reached another milestone with its Waterside Campus development as the first of its halls of residence have been officially ‘topped out’.

An official ceremony was held on the roof of the Francis Crick Halls on Tuesday 19 September, as in the construction industry the ‘topping out’ traditionally happens when the structural frame to a new building is complete.

Named in honour of Francis Crick, the pioneering Northamptonian scientist who co-discovered the structure of DNA, the halls will make up part of the Student Village, along with three
other halls of residences; Margaret Bondfield, John Clare and Charles Bradlaugh, a selection of town houses and a 32-bedroom hotel.

These halls have been specifically designed to put students’ needs first and offer a range of accommodation styles from 10-bedroom flats to 12-bedroom town houses, alongside essential facilities students need such as a shop, doctor’s surgery, laundry, chaplaincy, counselling area and cash machine.

The construction work on the £54 million Student Village is being undertaken by Kier Construction, which has previously worked with the University on building St John’s Halls and the
Innovation Centre, both located in the town.

Nick Petford, Vice Chancellor of the University of Northampton, said: “For many students this will be the first time they have lived away from home and as a University that places student experience and the support we provide to our students at the centre of what we do, we want to build the very best homes for our students to live, learn and relax.

“It’s exciting to think that in a year’s time, we will be ready to welcome the first students to the new campus and into these halls of residence when the next chapter of our University’s story will begin.”

Rafael Garcia-Krailing, President of the Northampton Students’ Union, said: “Living in halls of residence is an integral part of a student’s experience at University. Beyond a bed, a kitchen and a place to study – it’s home to so many firsts in a student’s personal development journey.

“So come September 2018, these buildings will be more than just four walls and a roof. They’ll be a home and a place for students to make lifelong friends and take advantage of the many fantastic opportunities available at the University of Northampton.”

Sean Yeo, Operations Director for Kier Construction Eastern said: “We are proud to be working with the University of Northampton once again to deliver student residences that will be
significant in the University experience of future students.

“We are excited to be celebrating, with the University and its students, this important milestone in the project.”

The University’s Waterside Campus is currently being built on a former 58-acre brownfield site on the banks of the River Nene close to Northampton town centre. Work started in October 2013, and the campus will open in September 2018 ready for the new academic year.