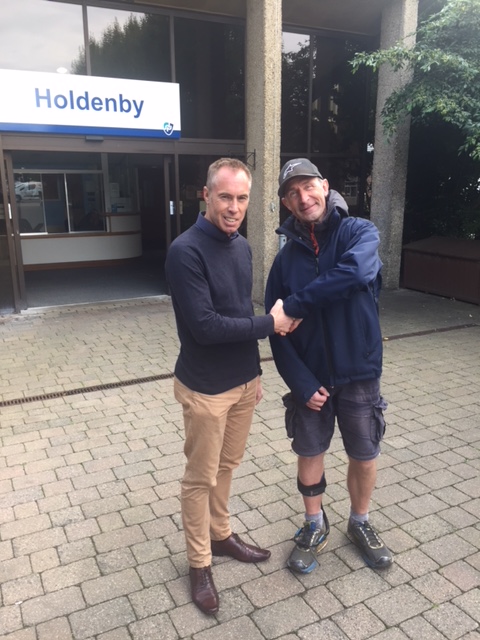 A student who starred in a TV programme about the disabled returning to work has spoken about how his future job prospects have been helped by giving motivational public speeches.

Andy Ibbott, from Northampton, featured in BBC2’s Employable Me last year and is a Foundation Year Sport and Exercise Science student at the University of Northampton.

He suffered a near fatal stroke in 2011 that left him needing to re-learn how to walk and talk. As a consequence, Andy has aphasia which makes it difficult for him to understand or produce speech.

Employable Me followed Andy giving motivational talks to businesses about his stroke recovery process, which has given him an extra therapeutic boost by helping with his confidence
and improving his spoken communication skills.

On the back of this, Andy has been approached by organisations around the UK and Europe about his recovery.

These include talking to students at UK schools and universities, the Ministry of Defence in Lynam and travelling to Stockholm to talk to the Swedish Motorcyclists organisation (SMC).

Andy, a motorcycling buff himself, enrolled on the University of Northampton course to gain expertise to help other motorcycling enthusiasts return to racing after suffering a disability.

The Foundation programme allows students without traditional university entry criteria to ease themselves into a degree. Andy hopes to focus on nutrition during the next three years.

Andy said: “It’s been a busy and full-on year, but the great thing about the Foundation course is I have been able to get used to being a student as well as start on the nitty-gritty of Sport Science. I’ve had great support from the ASSIST team here who help disabled students, as well as the lecture team in getting to grips with how university study works.

“My recovery has involved marathons at home and across the Sahara, but there’s nothing more challenging than getting up in front of a group of strangers to talk about having difficulty
talking.

“But it’s not that scary and I recommend public speaking to any student to help push their future employability, especially during the many in-course opportunities that are offered at the University. If I can do it, anyone can!”

Saul Cuttell, Lecturer in Sports and Exercise Science, said: “Andy is a credit to the subject and we can see him making great strides already.

“Communication skills such as addressing your fellow peers during presentations, getting your point of view across and forming an argument are vital keystones in any future career,
something we instill in our students right from the start.”

For more about Sport and Exercise Science at University of Northampton, see our website.