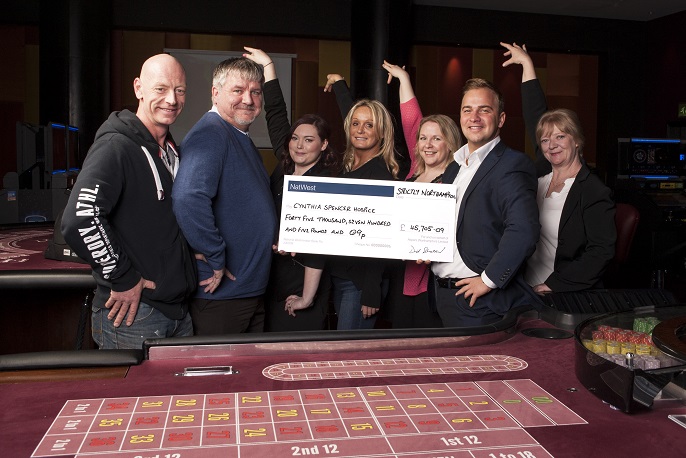 A record-breaking cheque for more than £45,000 was handed over to Cynthia Spencer Hospice at a special event hosted the event’s sponsor, Aspers Casino.

through donations from the audience, Step by Step members, contestants’ own fundraising efforts and Aspers Casino – the headline sponsors of the event for the second year running.

This is the highest amount raised from a single Strictly Northampton event so far.

John Helm, Cynthia Spencer Hospice fundraising manager, thanked Strictly Northampton for helping raise so much money for the cause:

“This year, Cynthia Spencer Hospice celebrates its 40th year and, in the last four years Strictly Northampton has raised a fantastic £210,000 for us. “That means more people can get the specialist care they need in their homes and hopefully we can carry on delivering that for them for the next 40 years,” he said.

Plans are already under way for this year’s Strictly Northampton in November and the organisers are hoping to make it even more successful than 2015.

David Stratford, Aspers Northampton general manager, said: “This is a fantastic, fun event for an unbelievably deserving cause and we are so pleased to have been able to support it in 2014 and 2015 and host events linked to the dance-off. Cynthia Spencer Hospice is a charity close to many hearts in Northampton and the passion and effort of all those involved was amazing.”

Event organiser Andrzej Mialkowski said he was absolutely thrilled with the success of last year’s show.

“This was our biggest show to date, with more contestants and a new format. We’ve received fantastic feedback and absolutely smashed our previous fundraising total.