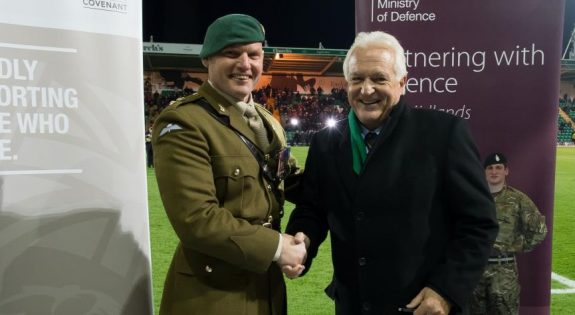 Saints chairman John White signed the Covenant on behalf of the club during half time of the Club’s home game against Newcastle Falcons, followed by a performance from the Oundle Combined Cadet Force Band to commemorate the occasion.

Mark Darbon, chief executive of Northampton Saints, said that it is important for the Saints to continue to show their support for the Armed Forces: “I’m very pleased that Saints have joined the list of Premiership clubs to have signed the Armed Forces Covenant. It confirms that we are an Armed Forces friendly organisation and that we recognise the enormous value that serving personnel, veterans and military families contribute to our country.”

John Wilson, the Ministry of Defence’s East Midlands regional employer engagement director, said: “I am pleased that Northampton Rugby Football Club has signed the Armed Forces Covenant, joining many other sports clubs across the country who have publically pledged their support to the Armed Forces community.

“From their military training, reservists and Service leavers develop a range of transferable skills and attributes that are valued in the civilian workplace; such as the ability to think on their feet, solve problems and lead a team. This is recognised by the Club and I look forward to developing our relationship.”