One hundred not out! It’s party time, as Jones Wholesale celebrates a landmark achievement! 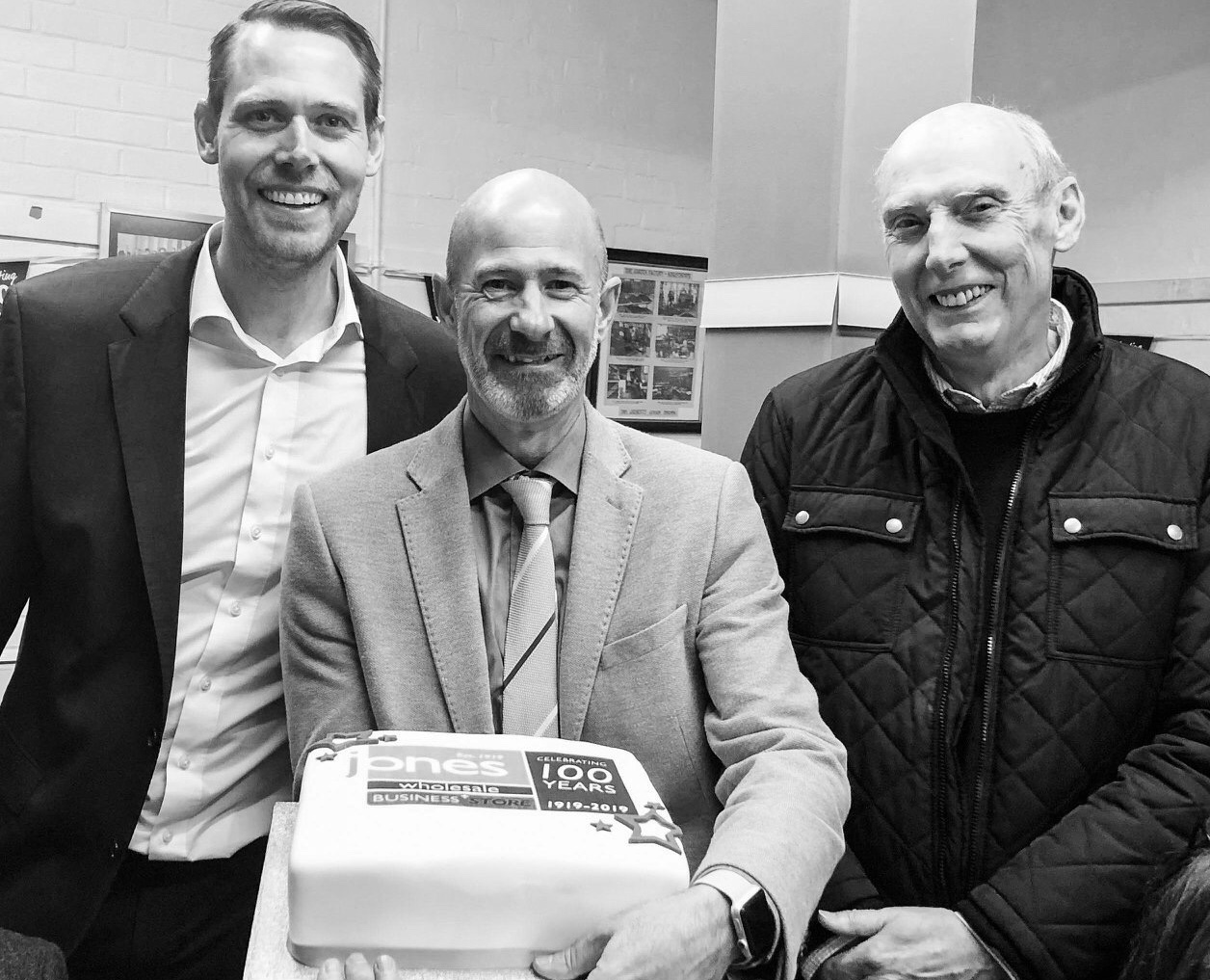 The one hundredth day of their one hundredth year was the perfect moment for the popular Northampton business Jones Wholesale to celebrate its centenary.

Local businesses from all over the town were invited to a celebratory networking event at their headquarters in Heathfield Way, Northampton, while a hundred lucky cash and carry customers were given goody-bags during the day to mark 100 years of service to the town.

A family business and proud of it, Jones Wholesale is now run by brothers Simon and Tom Allitt, who are the fourth generation to head it up. It was started in 1919 by Percy Jones, after his return home from fighting in the First World War. Trading initially as ‘P.L.Jones’, Percy began delivering goods in and around Northampton on his pushbike.

Six years later, with the support of his wife, Elsie, Percy expanded the business when he moved into a two storey premises in Woodford Street, and bought his first van. Steady development continued, and in 1957, now supported by his daughter, Elsie, and her husband Sam Allitt, the business made it’s third move, this time to Garfield Street.

By the 1960s, Sam was running the company, and in 1968 the business model changed from deliveries to an on-site cash and carry, and as it continued to expand, it became Jones Wholesale Cash and Carry in 1973, and then moved to its current premises in 1982. Sam and Elsie’s son, David took over the running of the business, with his wife, Lesley, after his father’s retirement, before handing it on to Simon and Tom in 2010.

Jones Wholesale now has over 25-thousand lines in stock: from clothing to home and garden, from electrical to health and beauty, from toys to stationery and office goods, from parties and catering to DIY and pets, and as well as visiting their premises in Heathfield Way, the company also offer their customers an online delivery service.

“We’re very proud to be the fourth generation running this wonderful family business,” said Simon, 51, who began working for his father in 1991. “From humble beginnings we have been serving the people of Northampton for a hundred years, and the celebrations are a tribute to all those who have, and do, make us a successful local business.

“We have – and have had over a hundred years – fantastic and loyal staff, some of whom today are following their own parents and grandparents working in the business, which makes us even more of a family business; indeed, our staff have always been part of the family.

“The same goes for our loyal customers, who today are following on from previous generations, and knowing that this is our centenary, many have engaged us with their own memories of family members using our services, or working for us over the years,” he said. “We even have suppliers today whose fathers or grandfathers have called on us in the past!”

As part of the celebrations of their centenary, Simon and Tom are taking part in a hundred-mile cycle challenge later this year, raising money for the Anthony Nolan charity, and the Northampton based Cynthia Spencer Hospice.

Said Tom, 42, who has been working for the business since 1997: “We’re looking forward to this in the summer, and are busy preparing for it , and this is just one of a number of events we have planned throughout the year – it’s our chance to say thank-you to all those who have helped us achieve this fantastic landmark.”

For more information about Jones Wholesale, visit their website: www.joneswholesale.co.uk.