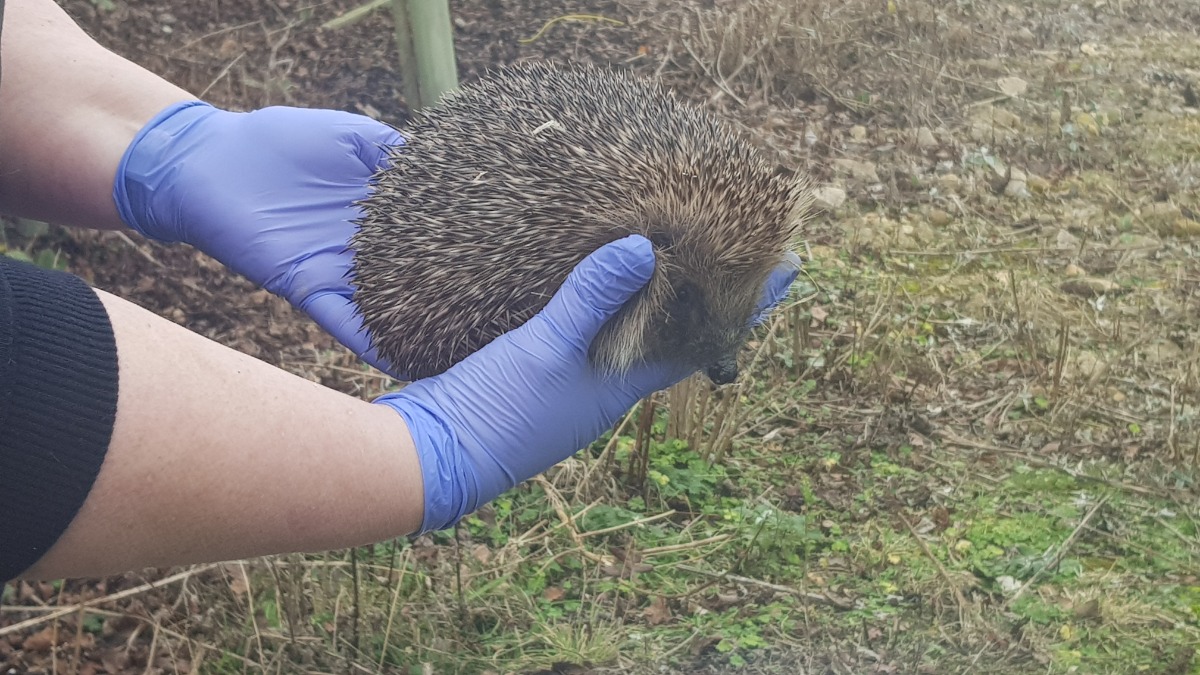 Phantom and Warlock* successfully moved in as part of the University of Northampton’s ‘hedgehog-friendly campus’ initiative.

On hand to manage the move were Janet Jackson, Senior Lecturer in Environmental Science, student Freya Smith who leads the University’s very own Hedgehog Squad and members of the University of Northampton’s Campus and Estates Services team.

Local hedgehog rescue organisation Little Wiggly Snouts* were also on hand to give advice on looking after these released animals. They also brought a hedgehog house, feeding station and food to help Waterside’s newest, prickly additions get settled in.

Warlock and Phantom are only five months old and, as they have been hand-reared, still need to learn how to forage for food. At this time of year there is less of the type of food hedgehogs like to hog such as slugs, worms, beetles and insect larvae (also why these endangered mammals are often referred to as the ‘gardener’s ally’).

To help them ‘tuck in’ members of the University’s Environmental Science subject area and Campus and Estates Services team volunteered to make sure Warlock and Phantom were watered and fed with a tasty cat food mix over the festive season.

Both Warlock and Phantom are doing well, and it is hoped they will be joined by fellow prickly pal Goblin, who was just under the ideal weight for the release.

“I feel this is the beginning of leaving a legacy to support wildlife at the University and shows that we are engaging with supporting animal rehabilitation with a local animal rescue centre. The next steps are to set up a student-led society to continue supporting hedgehogs after my graduation this year, and to apply for – and hopefully get! – Gold Status for all of our work.”

In the Spring of last year, the University’s efforts to be a more hedgehog-friendly campus were recognised when it was granted a silver award from the British Hedgehog Preservation Society.

The Hedgehog Squad are now looking to recruit more students and University staff to volunteer to help manage the feeding regime. Find out more about UON’s Hedgehog Squad and how to become a volunteer.

There is wider ecological work at the University with Project AWESOME.

Find out more about Little Wiggly Snouts on Facebook.