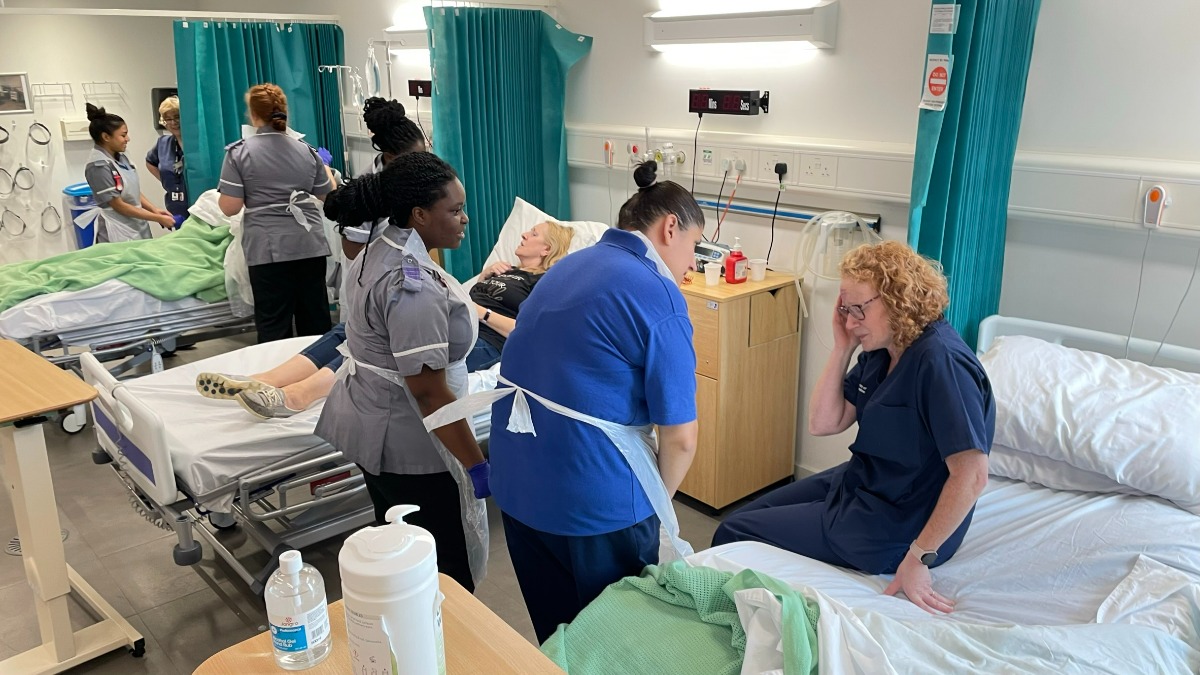 Alarms were ringing, and disoriented patients and family members needed to be calmed at ‘Waterside General’ (the Nursing and Midwifery teaching spaces at Waterside campus) during the activity that brought together many of the skills the students will have learnt over the past three years.

The students worked as a team treating five patients, either life-like training mannequins or played by their peers, lecturers or UON’s Hair, Make-Up and Prosthetics for the Stage and Screen students (this new degree also provided some lifelike injuries).

Working together, they identified who they would look after and what care they needed, preparing them for their final clinical placements and when they graduate.

Skills they used included prioritising care, allocating staff, communication skills such as breaking bad news, as well as making sure the care of their patients was their primary concern.

Gemma Farr is one of the students who took part. She said: “The major incident day was really interactive and very realistic. As student nurses it enabled us to understand a lot about the processes and considerations to be made about emergency situations and how we need to be able to prioritise and delegate. They were daunting at first, but very enjoyable as we got going and we all agreed we learnt a lot by the end.”

Fellow student Sharon Macdonald added: “While doing this simulation, I felt it was a ‘coming together’ of the skills I have learned since commencing the Nursing degree. Whilst I still have some way to go, I found that I was able to overcome my nerves and treat and talk to patients, relatives and colleagues professionally whilst under pressure."

This is the first time the Nursing team has held the Major Incident sessions, and it’s been so successful it will be repeated for future, final-year students across all four degrees and the Nursing Associates programme.

Shev O’Brien – Senior Lecturer in Adult Nursing at the University of Northampton – was one of the team behind developing the Major Incident training and sums up how the week went: “To make the scenario as real as possible for our students, we threw in quite a few extra surprises along the way. It’s a testament to their knowledge, skills and professionalism to see how well they coped with multiple conflicting, challenging issues.

“All were in full control of their ward and area of practice, giving them extra confidence before they finish their studies and making myself and my colleagues incredibly proud of how far they’ve come and will go.”

If you want to join Gemma and Sharon, see our course pages for more.