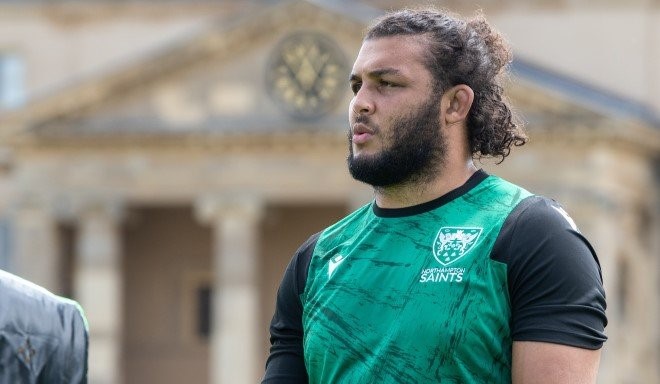 Lewis Ludlam has been named Northampton Saints’ Club Captain for the 2021/22 season.

The 25-year-old flanker will take on the role on a solo basis ahead of the new campaign, having shared the captaincy last term alongside Alex Waller.

With over 300 Saints appearances to his name, Waller remains a key member of the leadership group at Franklin’s Gardens, but the loosehead prop will step away from captaincy duties after a stellar three years at the helm which saw Northampton reach a Premiership semi-final, three European quarter-finals, and lift the Premiership Rugby Cup during the 2018/19 season.

Ludlam – who has 79 appearances and eight tries so far to his name in Black, Green and Gold – is the 66th captain of Northampton Saints since the Club’s inception in 1880, and the honour is not lost on the England international.

“This is something I’ve always dreamt of doing,” said Ludlam. “This is my Club – my home Club, which I have grown up supporting – so to be able to lead the team last year alongside Alex Waller was absolutely incredible.

“But this is now a new challenge for me and I’m really looking forward to it. I’ve learned so much from Alex over the last 12 months; he’s speaks incredibly to the group, and he’s been at the very top level for such a long time, so I’ll continue to learn from him over the next year and try to take advantage of all the experience he has.

“Everything we do at the Club is geared towards winning trophies, so I won’t be doing anything vastly different to what we’ve had in place before.

“But over the past few years, we’ve been seen as a very young squad, and now is the time for us to step up and prove we are not just a group with a lot of potential for the future.

“This year we have to show what we’re about right now, and be a side that competes for the highest honours in the Premiership and in Europe as well.

“Trying to make that step up from being a ‘young squad’ to being a squad that can win something right now is something that I am looking forward to – a big part of it will be the boys believing in themselves that we can go out and perform consistently week in, week out to compete with the very best.”

Ludlam has enjoyed a whirlwind three years at Franklin’s Gardens since the arrival of Director of Rugby, Chris Boyd.

After bursting into the spotlight during the 2018/19 campaign to become a first-team regular, the Ipswich-born back row earned his first England call-up in the summer of 2019 and went on to feature at the Rugby World Cup – he has since racked up 10 Test caps for the Red Rose.

He now has a century of Saints appearances in his sights, and is determined to reward Boyd and the rest of Northampton’s coaching team for placing their confidence in him with a string of imperious performances in Black, Green and Gold.

He said: “Whichever line of work you’re in, you want to be appreciated and trusted by your superiors.

“For the coaches to put their faith in me is a big thing, and I just want to do everything I can to repay that trust and to show that I am worthy of this role they have selected me for.

“So I’ll pour everything I have into the badge and into winning trophies for the Club to bring some glory back to the Gardens again.”

Ludlam will lead out Saints for the first time as solo skipper in this evening’s preseason friendly against Bedford Blues.

It is the first hit-out for Chris Boyd’s side ahead of the new Gallagher Premiership campaign (which kicks off at Franklin’s Gardens on Saturday 18 September), with another preseason clash lined up against Ospreys in seven days’ time.

And Ludlam insists his Northampton teammates are ready to blow away the cobwebs and lay down a marker for the year in front of a packed-out Goldington Road.

“You can tell around the Gardens that this week is a game week,” he added. “The buzz about the place has been incredible, and everyone is raring to go.

“For me, the game is a first opportunity of the season to show what the squad can do, and put what we’ve been working on together onto the pitch in a competitive environment.

“All the boys are really looking forward to a competitive fixture at Bedford; to set a marker and lay the foundations for the season to come.”