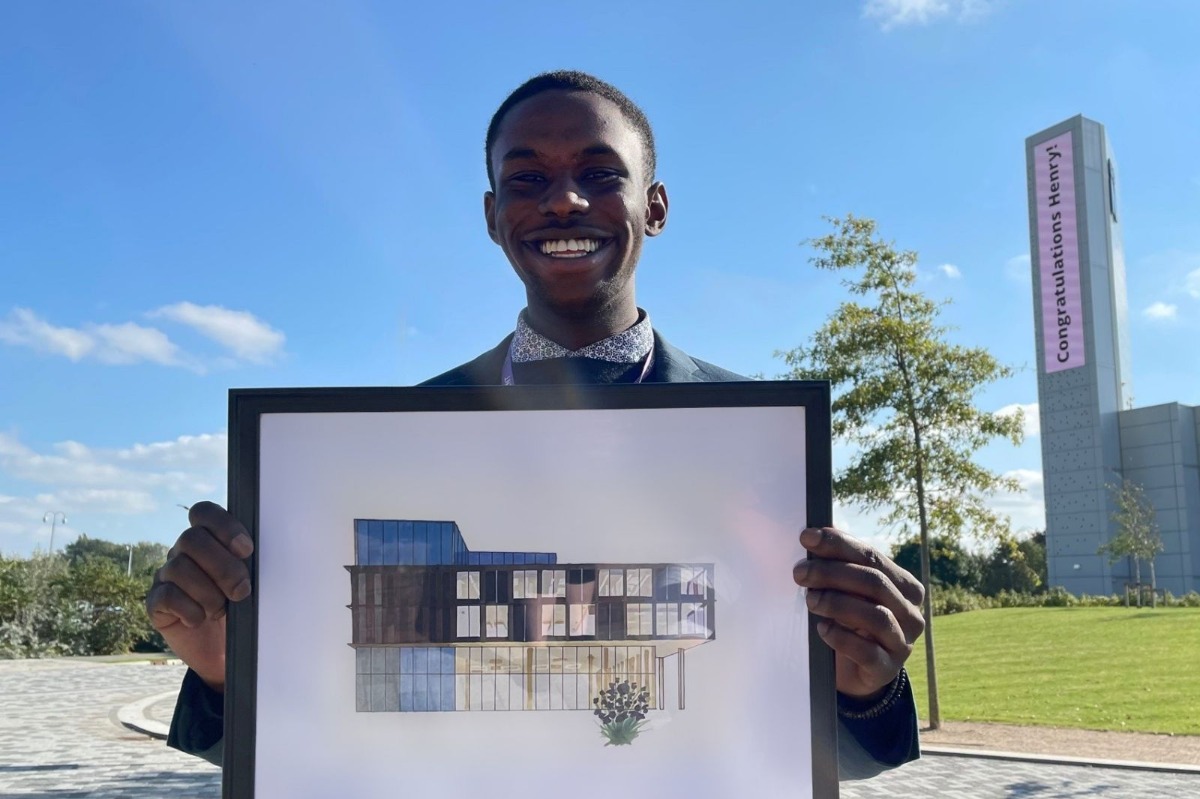 An A-level student’s sharp eye for detail saw him net a cash prize for his school in a University of Northampton (UON) competition.

‘Hometown’ was an illustration contest run during the University’s recent STEAM Northants* event. Aspiring artists were tasked to show off their creative skills by selecting buildings with meaning to them and to illustrate them in the colourful style of buildings featured on the Fridge Street list of properties in town.

They were asked to consider what purpose the building has and to try and identify any architectural styles that appear.

The winner was second year A-level student Henry Kena from Thomas Becket Catholic School for his interpretation of the Learning Hub, one of the buildings at the University’s Waterside campus.

Henry received £150 for his school to spend on art or science equipment and a framed copy of his work. Henry’s winning illustration is also featured on the 12-metre high digital screen on the University’s 26-metre tall ‘Power Tower’ and the TV screens around the building he admires.

Henry – originally from Bergamo, Italy – visited Waterside last week and was presented with his framed design by Senior Lecturer in Marketing and competition judge Kardi Somerfield, before being whisked off for a tour of the site.

Henry explains why he entered the competition and how he approached the brief: “I’m very happy to win but I’m really surprised as I’ve never won anything for my artwork before. I only found out on the last day of school; my teacher called me and I thought I was in trouble for something!

“I entered the competition because it was an interesting brief. The technique I used was to look at the buildings in Northampton I liked, especially at night when they are lit up and when I could notice the different contrasts, such as with the Learning Hub which has so many interesting parts to it.

“I started with the basic shapes of the building then working on finer lines to make them stand out, before moving on to the colours such as the windows, just building up each layer as I went. People seem happy with it and that makes me proud.”

Bonnie White, Lead A Level Art Teacher at Thomas Beckett Catholic School, added: “We’re absolutely delighted Henry won, and the money will be put toward buying equipment to help our students cut the frames for their artwork more professionally, as well as waterbrush pens for Henry.

“This will provide something all of our Sixth Form students will enjoy and will also give them greater autonomy with their work. The competition has also given Henry extra incentive and inspired him to go on with his artistic interests.”

About why Henry’s submission stood out from the crowd to her, Kardi concludes: “Irrespective of Henry choosing a University building, his illustration stood out because of the confident lines in his work, and in particular the way he had drawn the lights inside the building. He had also followed the brief and the methodology in the instructions really well.”

*Run by the University’s Schools Engagement team, the event showcased to young people the subjects around STEAM (science, technology, engineering, arts and maths) and careers available to them.