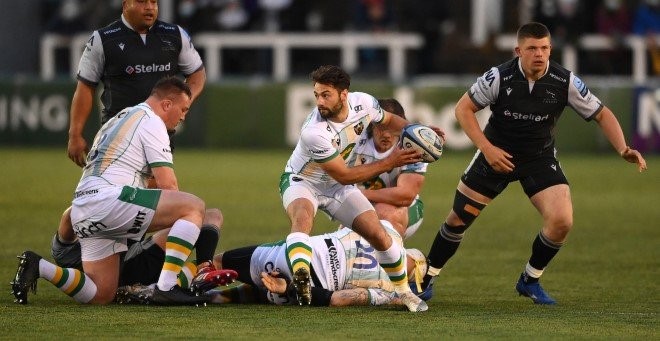 Northampton Saints has announced that scrum-half Henry Taylor is leaving the Club to pursue a new career outside of rugby.

The 27-year-old No.9 made 33 appearances in two seasons in Black, Green and Gold after making the switch to Franklin’s Gardens in 2019.

Taylor began his career in Harlequins Academy, also having stints with Loughborough Students, Bedford Blues and Saracens on his way to Northampton, where he notched up six Saints tries.

He also boasts international recognition from his playing career, having won the World Rugby Under-20 Championship with England in 2014, but now retires from the professional game to pursue a career in the city.

“I’ve been lucky enough to make some amazing memories at Saints and throughout my entire time playing rugby, and made some even better friends doing it,” said Taylor.

“But now is the right time for me to try my hand at something new and I’m really excited about this new opportunity I’ve been given to pursue a new career path outside of rugby.

“I want to thank everyone at Northampton for their support over this decision, and I wish the squad and all the Saints supporters the best for the future.”

Saints’ Director of Rugby, Chris Boyd, added: “Henry has been an important part of our playing group over the past two seasons and leaves with our best wishes for the future.

“He’s been completely committed to Saints throughout his time at the Gardens and I’d like to thank him for all he has done in Black, Green and Gold.”

Saints can also confirm that scrum-half Chris Cook has signed a short-term deal at Franklin’s Gardens as injury cover.

The 30-year-old No.9 has plenty of Gallagher Premiership experience, coming through Bath’s Academy system and making 142 appearances in Blue, Black and White between 2010 and 2020.

Cook also enjoyed a stint with Bristol Bears last season, and has representative honours to his name, making nine appearances for England U20s in 2011.

Boyd added: “We’re very pleased to bring Chris into our set-up on a short-term basis. He’s a scrum-half with a lot of Premiership experience – he’s shown he can perform at the top level and will add depth and quality to the group we already have.

“Chris joins Alex Mitchell, Tom James, Connor Tupai and Jake Garside in our stable of English-qualified No.9s. We have a range of experience in that group, but a huge amount of potential across the board, and we’re confident all five will help to bring the best out of each other this coming season.”