Cycling a hundred miles to celebrate a hundred years raises thousands for charity! 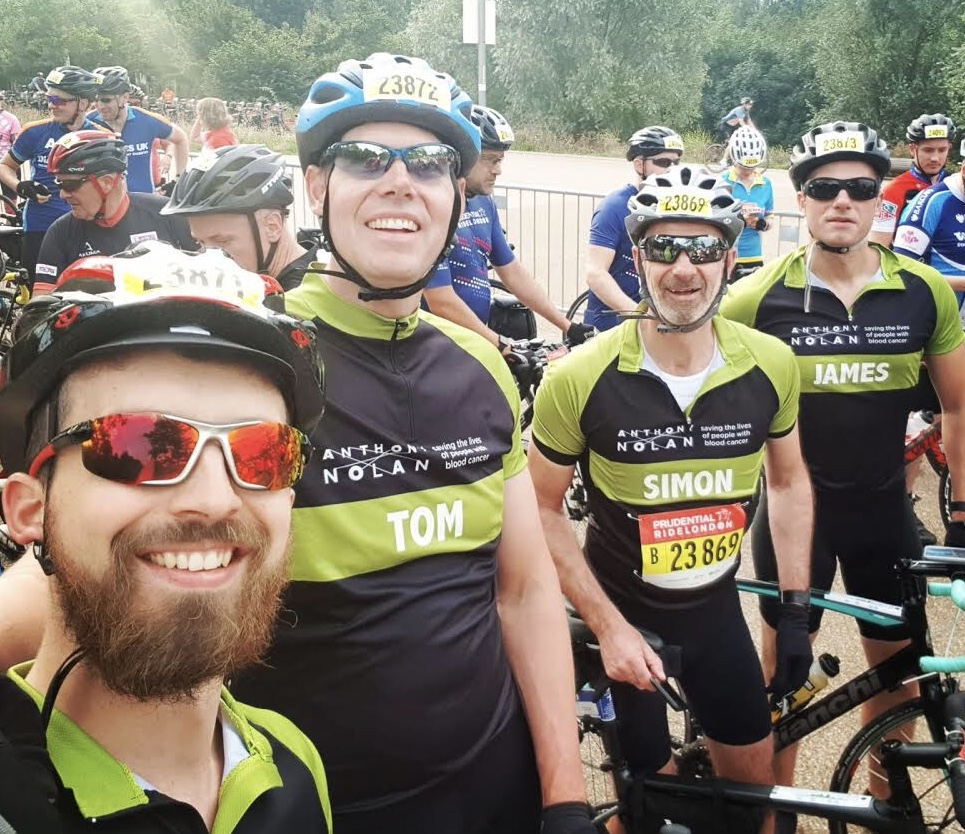 A team of hardy cyclists from Northampton have completed a hundred miles ride around London and the Surrey Downs to raise funds and awareness for the charity that saved their father’s life. So far, they have raised in excess of £6,000, with donations still rolling in.

Simon Allitt and younger brother Tom, the joint partners of the Northampton based business Jones Wholesale, and their younger brother James, were among hundreds who took part in the Prudential Ride 100. They were fund-raising for the Anthony Nolan charity, and joined on the day by Ashley Warren, the warehouse manager at Jones Wholesale.

Said Tom: “This year Jones Wholesale marks its hundredth anniversary as a business, and as part of the celebrations we wanted to raise money for causes close to our heart, so we came up with the idea of a hundred miles for a hundred years.

“A few years ago, my dad, who ran the business before we did, was diagnosed with T-Cell Lymphoma and forced to retire - he had a stem cell transplant that saved his life, and it was the Anthony Nolan charity who provided that stem cell; so raising money for that charity is our way of saying thank you!

“We only started cycling earlier this year, but we trained hard for it, and though it was tough, we’re all thrilled and delighted to have completed the ride – I’ll almost go as far to say that we all genuinely enjoyed the experience, but knowing we were raising money for a valuable cause was all the incentive we needed.”

The centenary celebrations of Jones Wholesale continue on Friday, September 13, when the company host a charity golf day at Whittlebury Hall, raising more money for Anthony Nolan, and also the local Northampton based Cynthia Spencer charity.

Said Tom: “Anthony Nolan is for our dad, but we’re very proud of our Northampton roots, and Cynthia Spencer is a fantastic local charity which we are always happy to support – we want to raise as much money as we can for both.

“We’ve had a great response, it’s going to be a fantastic day, but there’s still room for a few more teams, and as far as we’re concerned, the more the merrier,” he said. “We’ve also got some sponsorship opportunities still available; so many people have been extremely generous, but again, the more the merrier so we can raise lots of money for our chosen charities.”

If you would like to enter a team in the Jones Wholesale Charity Golf Day, contact Tom via email at tomallitt@joneswholesale.co.uk. If you would like to donate to Tom and the team for their cycle challenge, go to: https://www.justgiving.com/fundraising/jones-wholesale-business-store