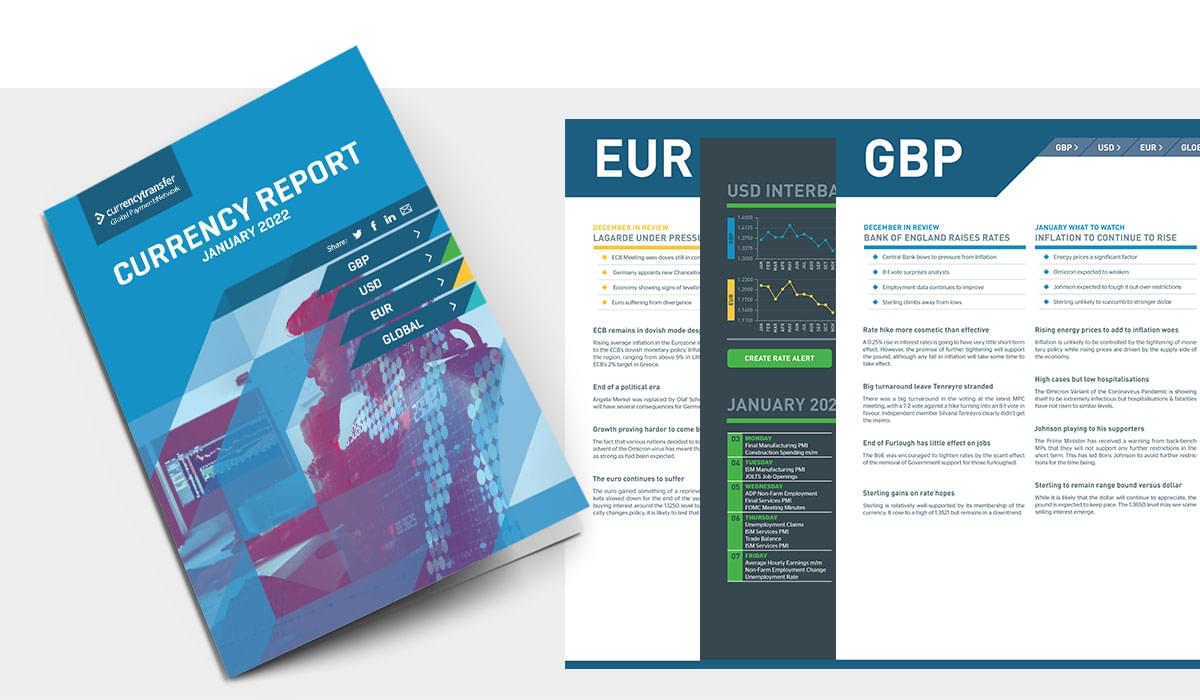 January 2022: Monthly Currency Report
Download our free monthly currency exchange report aims to provide deep insights into the political and economic events worldwide that can cause currencies to change and how this can affect your FX business.Download >

GBP - Great British Pound
Factory prices are rising at their fastest ever rate
With the country still gripped by the highly contagious yet seemingly less serious Omicron variant of Coronavirus, the Government appears to have taken a step backwards from dealing with the material effects of Brexit.

With the Chief Negotiator having resigned and the role having been handed to the Foreign Secretary, there are hopes within the sectors of the economy that export to Europe that progress would be made in solving the country’s differences with the mainland over several remaining issues.

However, Liz Truss, while not adopting the highly confrontational stand made by her predecessor has done little to snake progress towards agreement.

It is doubtful that Coronavirus will be completely eradicated, and it is something that it is expected the population will have to live with, but Brexit still is the most significant barrier to the UK in terms of its economy and status within global trade.

It appears that consumers are beginning to accept the coronavirus situation as the new normal and beginning to return to their old ways.

Consumer credit rose in November for the first time since the Pandemic began, while shop prices rose by 0.8% in December from 0.3% in November. Household savings also fell in November, a sure indicator that the consumer is beginning to appear from its own form of lockdown.

While the NHS appears to be coming close to being overrun by new infections, the prime Minister is still being stoic in his opinion that fresh restrictions remain unnecessary. The next two weeks will be critical in proving him right.

With this week being fairly quiet from a data perspective, the pound is being driven by events in both the U.S. and Europe. It managed to claw back most of its losses from the earlier session versus the dollar, rising to 1.3557 and closing at 1.3528.

Meanwhile, versus the single currency, the pound has started the year on the front foot, looking likely to break back above the 1.20 level which hasn’t been seen since February 2020.

It will take a week or two for patterns and trends to appear, but it seems for now that the countries with the more hawkish Central banks are likely to hold sway.

USD - United States Dollar
Hopes for ease in inflation slowly emerging
There are early signs that the bottlenecks in the U.S. economy are beginning to ease with ports on both the Atlantic and Pacific coasts reporting faster turnaround times and fewer containers remaining in situ for more than a week.

This will bring further positivity for the economy which was beginning to show signs of a moderate slow down, even before the Christmas Holiday Season.

The minutes of the most recent FOMC meeting will be published later today. From the statements made at the time of the meeting, a more hawkish outlook was agreed, with the pace of withdrawal of additional support for the economy being doubled.

Observers will be looking at the minutes to see that there is general agreement about a more hawkish outlook, and it is inflation rather than growth and economic activity that is the biggest threat.

While the minutes reflect views that are three weeks old, there is very little that has changed in the meantime, and in any event FOMC members tend to study trends rather than one-off events.

Employment is still the single most crucial factor and with weekly jobless claims and with the rate falling below 200k new claims in three of the past four weeks, it is expected that the headline non-farm payrolls data which will be released on Friday will show a stronger performance than the rather insipid 210k new jobs created in November.

At the time, analysts were falling over themselves to make excuses for the weak data and it is expected that not only will the December headline be stronger but there will be an upwards revision to the November headline.

The next FOMC meeting will be held on January 25/26. For now, market expectations are for further confirmation of the more hawkish outlook although the pace of withdrawal of support is unlikely to be changed.

Looking forward, advance guidance about the first interest rate hike may be given, but Jerome Powell may want to wait until the February meeting to offer a firmer commitment.

The dollar index is still in a narrow range, possibly awaiting the release of this week’s data before moving away from a period of consolidation.

Yesterday it fell back close to its end of year level of 96.03 before closing a little higher at 96.28.

EUR - Euro
Omicron and Inflation bring risks
While Central bankers are not generally known for panicking, Christine Lagarde, the ECB President will maybe need to begin a fresh charm offensive to quell the concerns of a few Eurozone Central Bank Presidents whose heads are beginning to be turned by the more hawkish views of some of their colleagues.

Inflation data is due for release on Friday along with several confidence indexes.

It may yet be proved that the unpopular decisions taken by a few nations to lockdown as the Omicron variant hit may have been a little premature and could have set the recovery back by possibly as much as a quarter.

Ms. Lagarde faces a tough few months as she tries to navigate a safe path for the economy away from the 1.85trillion euro bond buying program while not throttling the green shoots of economic recovery.

The most toxic blend of falling growth and rising inflation will haunt Lagarde’s actions and she is unlikely to gain too much support from the Eurozone’s strongest nation.

Germany will be tempted to say we told you so and expect Lagarde to ward off any threat of stagflation. While most observers are concentrating on the short-term measures that are going to need to be agreed, Lagarde will also be having to consider the wider picture for the fiscal economy which has reverted to type with borrowing far higher since the Pandemic began and unmanageable debt to GDP levels appearing.

Ursula von der Leyen is still an unpopular figure following her handling of the distribution of vaccines and the unnecessary squabble she got into with the British Government on this subject. She is now going to need to get tough with those countries who have abandoned fiscal discipline in favour of economic survival.

She will have to do this without the support of her strongest advocate since Angela Merkel has now left the building.

The euro has started the week/month/year under a little pressure, it has finished lower on both trading days. Yesterday, it fell to a low of 1.1272, closing at 1.1284.