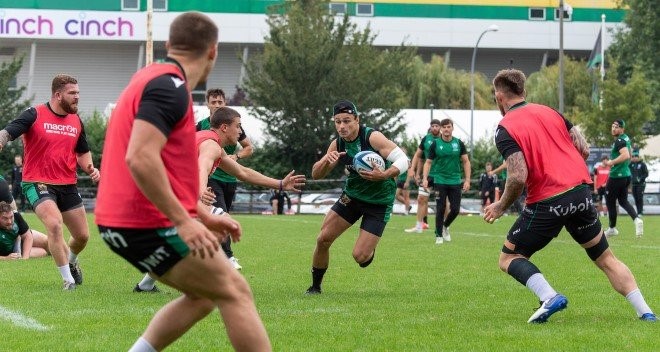 Northampton Saints will take a 29-man contingent to Bedford Blues this evening as they face the Championship outfit in their first preseason clash ahead of the 2021/22 campaign.

The men in Black, Green and Gold will field a side comprised of senior heads, new faces and Academy talent – with a number of players set to pull on a Northampton jersey for the first time, including new signing Juarno Augustus, who starts at No.8.

Saints’ last outing against Blues came back in 2013 as they ran out 45-21 winners, and with a bumper crowd expected at Goldington Road, Boyd’s side will be hoping to repeat that feat tonight.

Club captain Lewis Ludlam will lead out the side from the back row alongside Senior Academy flanker Ollie Newman and Augustus – who arrived at Franklin’s Gardens earlier this summer from the Stormers.

Tom Wood makes a rare appearance in the engine room alongside lock Alex Moon, with hooker James Fish joining props Alex Waller and Ehren Painter in the front row to round off the pack.

Having featured for Blues as part of Saints’ strategic partnership with the Championship side last season, Dani Long-Martinez starts on the wing for Saints – with Taqele Naiyaravoro lining up on the opposite wing, and Tom Collins completing the back three at fullback.

Bedford-born Tom Litchfield lines up in the centres alongside Rory Hutchinson, while George Furbank starts at fly-half and joins Alex Mitchell in the half-back berths.

Meanwhile, there is a blend of youth and experience amongst the 14 replacements named by Northampton for the Goldington Road clash. The likes of Paul Hill, Teimana Harrison and Matt Proctor will be looking to make an impact from the bench, while new Academy players Geordie Irvine, Jake Garside and George Hendy are set for their first experience of senior Saints action should they enter the fray.

Tickets are still available for the fixture from Bedford Blues directly starting from £18 (adult) and £2 (under-18). But if you cannot make it to the game at Goldington Road, the match will be streamed LIVE on SaintsTV from 7.30pm.