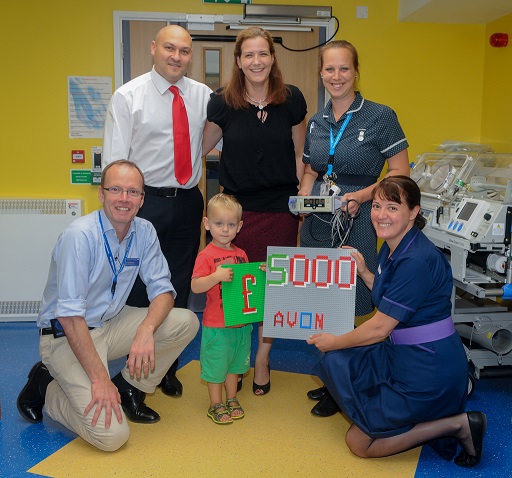 Avon Cosmetics is continuing its legacy of supporting the community by awarding £5,000 to local Northamptonshire intensive care unit, Gosset Ward.

Nominated by Avon employees in the Northampton office through a scheme called Associates Choice, this money will make a real difference to the local community. This donation follows the company’s recent contribution of £5,000 to Cransley Hospice in Kettering.

Gosset Ward is a neonatal intensive care unit at Northampton General Hospital which cares for newborn babies, mainly those born premature or who require some form of special high dependency or intensive care nursing.

The purpose of the Charity is to provide above and beyond what the NHS can fund. Northamptonshire Health Charitable Fund is the charity for Northampton General Hospital and Northamptonshire Healthcare NHS Foundation Trust, funds raised help to enhance and improve patient care and facilities so the local community has the best possible health care now and in the future.

Voting for Gosset Ward was driven by Avon Northampton associate Sarah West whose son was cared for by the unit in the first vital few weeks of his life.

Sarah West, Avon Field Communications Manager, says: “Our son, Ryan, was born seven weeks early and spent the first five weeks of his life in Gosset Ward. The medical care and attention he received and the amazing support offered to me and my husband, Richard, was amazing.

“I was delighted to be told that Gosset Ward had won the money and am so grateful to so many of my colleagues that voted.

“We will never be able to repay the hospital, ward and staff for what they did for us but to be able to give a contribution for their amazing ongoing work is a real privilege.”

Consultant Paediatrician Dr Nick Barnes says: “We’re very grateful to Sarah for championing Gosset Ward, to Sarah’s colleagues at Avon for choosing us and of course to Ryan for coming to see us on the ward. Thanks to their generosity, we’ll be able to buy additional oxygen saturation monitors which help us to keep an eye on the amount of oxygen our babies’ red blood cells are carrying. This is a crucial piece of kit for us because too little or too much oxygen can be harmful to a premature baby. It’s a small piece of equipment but it makes a big difference to keeping our babies safe and well.”

Avon is committed to improving lives and making a real difference both nationally and in the local community. Whether it be their long standing commitment to charity partners Breast Cancer Now, Refuge and Women’s Aid, with initiatives like Associates Choice or by empowering women with flexible careers through their Independent Representative opportunity.