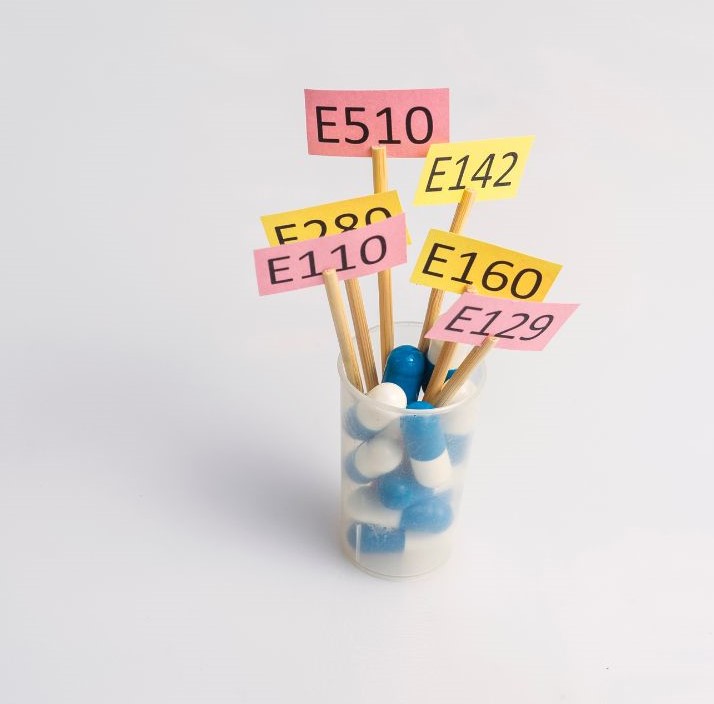 Additives have received negative press over the years, especially sweeteners in low-calorie products. However, food preserving techniques have been around for a long time used by Romans and Egyptians. Some natural preserving techniques are still practised. Salting and smoking were early methods used to preserve meat and fish, this is still done today for bacon, salmon and some cheeses. As science and knowledge has improved, more substances have been discovered and developed, e.g., cooks frequently use baking powder as a raising agent, it also thickens sauces and gravies.

The last 50 years has seen significant strides in food science and technology, newer additives have a large part in this progression, – emulsifiers in margarine, antioxidants in pastries, preservatives in anything that requires a longer shelf life and colouring to improve appearance.

Additives are described as a substance not normally eaten as a food by itself and not normally listed as a main ingredient, regardless of whether it has nutritional content, although this is possible. For example, Vitamin C and ascorbic acid are classed as naturally occurring chemicals and essential nutrients, however, when added to food specifically as preservers, they are regarded as additives.

Whether readily acknowledged or not, additives play a big part in what the public now expects from its food. If your customers enjoy tropical fruit, it will require additives to ensure it can travel, endure temperature changes, look appealing and still be safe to eat; without additives this would not be possible.

Do your customers need to know?

Book a call with The Nutrient Gap to help you identify your ingredients.

Additives are regulated carefully – they must have a useful purpose, be safe and must not misinform the customer. There is an Acceptable Daily Intake (ADI) for each individual food additive. The ADI is the standard amount of each additive recommended for consumption over the course of a person’s lifetime without a harmful effect on their health, a large safety margin is included in this.

The EU regulation (EC) 1333/2008 for all food additives has been in place since 2008 and shows how additives are assessed and approved for use.

The full list of food additives and their use can be found on the European Commission Website.

Where food ingredients include additives, the name or E number of the additive must be listed on the label e.g., citric acid or E 330, it must also include the purpose of the additive and the reason for its use e.g., Anti-Oxidant. “Best practise for labelling is to add the name of the additive rather than using the E Number. “Says Georgina Stewart from The Nutrient Gap.

E-numbers denote approval by the EU and evaluation for safety by EFSA (European Food Standards Agency). Each additive has an individual E-number.

The colourings investigated in the Southampton study were Sunset Yellow (E110), Tartrazine (E102), Carmoisine (E122), Ponceau 4R (E124), Quinoline Yellow (E104) and Allura Red (E129). In 2008 the UK Food Standard Agency were looking to phase these colours out, but by 2009, the European Parliament adopted new labelling regulations for foods containing any of these food colours; these must be labelled with not only the relevant E number, but also the words “may have an adverse effect on activity and attention in children”

After several research studies, the EFSA concluded the evidence that mixtures of additives influenced children’s activity, was limited because the children in these studies had already been described as hyperactive. Findings could be relevant for certain individuals displaying sensitivities

to food additives or food colours but given most studies were not indicative of the general population, it was not possible to accurately calculate the scale of these sensitivities.

A small number of people with specific allergies have a sensitivity to certain foods with additives. Where it has been found that additives effect allergies these have aggravated existing allergies rather than causing them.

Below is a list of additives reported to cause some adverse health effects:

Is your business covered?

If you have concerns or enquiries about additives in your ingredients book a free 20-minute consultation with The Nutrient Gap.

Get your business healthy from the inside out.